In the small town of Sedlec in the Czech republic is something truly extraordinary.

A Roman Catholic chapel profusely decorated with the skeletal remains of the dead. 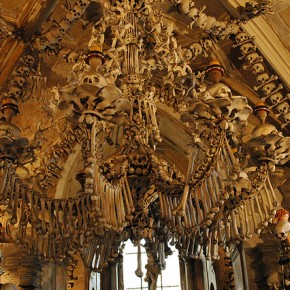 Updated 2/11/2020 – 40,000 skeletons were used in the decoration of the chapel, with the bones forming up chandeliers, coats of arms, and other accents to the gothic interior.

The story of the Sedlec ossuary starts in 1278, when a certain Henry, Abbot of the Cistercian monastary at Sedlec, made a pilgrimage to the holy land.

He brought back a handful of earth from Golgotha and sprinkled it over the cemetery where the ossuary now lies.

Soon, the desire to be buried in this cemetery exploded,  and during the period of the black death thousands were laid to rest here.

In the year 1400 the present church was built in the center of the cemetery, which was by then extraordinarily overcrowded.

New burial space was required, so thousands of graves were exhumed and stacked in the lower section of the church.

In 1870, the Schwarzenberg family commissioned a local artist named Frantisek Rint to use the piled up bones to decorate the church.

The result was nothing short of amazing.

Even the artist’s signature is in bone, and the great chandelier contains examples of every bone in the human body.

Crypt of the Capuchins

In the heart of Rome lies the church of Our Lady of the Conception of the Capuchins.

The church was constructed in the early 17th century, and is the burial place of over 4,000 Capuchin friars.

Between 1528 and 1870 these bones were carefully arranged in the rococco and baroque style, culminating in an oddly decorative and cheery arrangement of the dead, in contrast to the austere gothic arrangement used at Sedlec.

Each of the rooms comprising the ossuary is themed.

The so-called Mass chapel is composed entirely of unarticulated free bones, to symbolize freedom from purgatory.

Quantities of heads make up the crypt of skulls which is crowned by an hourglass with wings made from shoulder blades.

The adjacent room is dedicated to pelvises, and the one after to legs and thighs.

The final crypt bears the reaper on its cieling, as a skeleton, holding his characteristic scythe and a scale.

The whole display serves as a reminder that life is finite, and at its end a sign alludes that you too will someday meet the reaper.

Bones in Paris and Portugal

Possibly the most visually disturbing ossuary lies in Portugal in the city of Evora.

This ossuary contains the bones of 5,000 people, again arranged decoratively, but accented with several corpses hanging from chains that are not skeletal, but are dessicated mummies.

Above its entrance are the words “We bones that are here, for your bones we wait”.

To the north lies by far the largest of all ossuaries, located in the catacombs of Paris.

Containing the bodies of over 7 million people, these chambers span miles, with no one really certain as to their full extent.

The bodies were disinterred from multiple Paris cemeteries to make room for more burials, or when a church became defunct and new construction facilitated the need to exhume the graves.

One Paris cemetery had so many burials, that the repeated burials of mass graves led to the ground level rising almost twenty feet.

Starting in the 18th century, the bones were removed as needed and placed against the stone walls of the catacombs, which were originally Roman-period limestone quarries.

To get to the original stone walls of the corridors, one would have to climb over an average of nine feet of human bones.

During WWII, both the Germans and the French Resistance used these caverns, and in 1871 the communards in Paris killed a group of Royalists in one of the chambers.

Dedicated to soldiers who died at the Battle of Verdun in 1916.

130,000 unidentified soldiers, both Axis and Allied, lie in the ossuary.

The bones in the ossuary can be seen through small windows, carefully stacked in small alcoves.

This ossuary serves as a burial place, but also as a reminder of the horrors and sheer enormity of the first world war.

Ossuaries are a fascinating reminder of our mortality, and while they may seem macabre, they serve a purpose.

As our population expands, and our available burial space declines, new ossuaries may be built to house the disinterred bones of old cemeteries.

While they will likely lack the artistic flare of the past, they will be no less potent in their ability to remind us that death is always around the corner.