The Underground – Cities and Subcultures Beneath the Earth

The warm, refreshing breezes of a late spring day are irresistible to the majority of us. 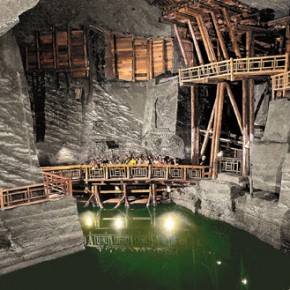 Updated 2/11/2020 – We spend our vacations on the beach, and we live in houses with windows optimized to let the sunlight in.

Some of us try to live even closer to the sun by taking up residence in high-rise apartment buildings that mimic Icarus in steel.

Of course, there are always exceptions to every rule.

Beyond the night culture that lives their daytime in the middle of the night, some people simply aren’t happy unless they spend at least part of their lives underground.

Theaters beneath the earth

The city of Paris is one of the most romantic places on earth.

Couples stroll – in the sunlight – on the champs-elysees completely unaware that an entire world exists below their feet.

Underground Paris is easily as interesting as its counterpart above.

Miles of catacombs exist under that city that contain nothing but stacks upon stacks of human remains.

In the late 1700’s, Paris’ churchyards were full from centuries of death.

Thousands of skeletons were disinterred and moved to the caverns under the city, but the workmen didn’t just toss the bones into the darkness.

They added an artistic flare to this world of the dead by arranging the bones in macabre designs and even adding a sign stating “Stop, this is the Empire of the Dead”.

Tourists now visit the Paris catacombs by the busload, but during the after-hours other groups take to the depths.

In 2004 a society known as “The tunneling Mexicans” was found to be using the catacombs as a cinema, complete with projection equipment, an extensive library of film noir, a fully stocked bar, and a restaurant.

Taunting the police claiming that there are thousands of other such areas and activities in the catacombs, the group somehow managed to retrieve their equipment and apparently moved somewhere else beneath the streets of Paris to watch their movies.

In the heart of America lies a cavern beneath the streets of St. Louis that served as a playground for a very wealthy family.

Originally a natural cave, this subterranean world was first used by the Lemp Brewery as a beer cooling cave in the days before refrigeration.

The Lemp Mansion, now a bed and breakfast prolifically haunted by the Lemp family, was located nearby, so it wasn’t long before the family began using the cave’s cool environment for recreation.

They built a small private theater in the cave, along with a swimming pool.

The Lemp’s went broke during prohibition, resulting in a number of suicides within the family, and the cave found new life in the 1950’s as a tourist attraction.

Eventually, the cave was partly collapsed during the construction of an interstate, and the rest of it sealed.

Beneath the streets of St. Louis still lies Lemp’s playground, inaccessible and rotting quietly a century after its heyday, perhaps also haunted by the Lemp family.

Not surprisingly, governments are among the most avid users of underground caverns.

In the UK, in Wiltshire, a cold war-era bunker served to ensure that the British government would survive a nuclear strike.

Totaling 35 acres, the complex was designed to house 4,000 people including the cabinet, a number of civil service workers (most of whom had no idea they had a place there, due to the top secret nature of the bunker), and domestic staff.

Underground roads in the bunker are set up in a city grid pattern, lined with everything that could possibly be needed including a hospital, offices and even a pub.

The facility was finally decommissioned a few years ago, in light of the end of the cold war.

The US government has multiple bunkers to ensure continuity of government.

Cheyenne mountain is the most public of this, a facility built by hollowing out a mountain, but others exist including “Site R”, an underground bunker used by Dick Cheney during the  9/11 attacks.

Another is Mount Weather in Virginia, a poorly understood and enormous facility designed to house key parts of the government, in case of a national emergency.

Since 9/11, this facility has seen drastic increases in funding and support.

No doubt many other such facilities exist, but are kept entirely secret.

For the enthusiast of the subterranean, decommissioned bunkers are available for sale that they can call home.

Former nuclear silo’s, going multiple stories into the ground, can be had for a price and turned into huge and luxurious living spaces.

Unfortunately, they tend to be located in the middle of nowhere, and require huge amounts of money to renovate, but none the less if you really want to live under the earth, you too can become a resident of the underground.