One of the most rare and disturbing religious paranormal phenomena is the stigmata, or the manifestation of the wounds of the passion of Christ on the body. 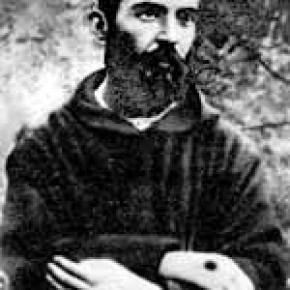 Updated 2/11/2020 – These wounds can range from a seemingly psychosomatic feeling of the wounds and the associated pain, but with no corresponding visible damage to the skin, to full blown unexplainable wounds that bleed and cause great discomfort to the stigmatic.

The 20th century saw one of the most famous stigmatics, Padre Pio of Italy, who bore the bleeding wounds for decades and has since been declared a saint by the Roman Catholic Church.

St. Pio had been surrounded by paranormal phenomena since childhood.

As a youngster, he was believed to be able to see apparitions of Jesus and Mary, and even went so far as to assume that every person could see them.

These continued into adulthood, until eventually Pio became a capuchin friar.

During his time as a novice waiting to become a capuchin, the paranormal phenomena seem to have become more dark and increasingly powerful.

In one incidence, the devil appeared to him in his room in the form of a large black dog with glowing red eyes.

As early as 1911, he first manifested the stigmata, which he described in a letter as red marks on his hands and feet that caused severe pain.

The wounds eventually became visible, sometimes bleeding profusely and would continue the rest of his life.

He often prayed for the wounds to disappear, but not the pain, as he found the marks to be an embarrassment.

They would never completely disappear, so he was known to hide them.

The visions of the devil continued as well, appearing to Pio as everything from a dancing naked girl, Pope Pius X, St. Francis and most disturbingly, the virgin Mary.

One wonders how difficult of a time he had in distinguishing between visions from heaven, and apparitions from hell.

Pio died in 1968, still afflicted with the stigmata.

About 300 or so stigmatics have been reported over the last two millenium.

The first was St. Paul, who claimed to have them in a letter to the Galatians.

St. Francis of Assisi also exhibited them in the 13th century, and cases continue to this day.

A number of explanations have been given for the stigmata, ranging from fraud to the wounds somehow being created by the sufferer’s own mind.

The phenomena is usually restricted to catholics, however, in the case of the hindu holy man Chaitanya Mahaprabu (1486-1534) he was said to spontaneously bleed from multiple areas of his body.

Often, stigmatics also exhibit a separate phenomena called inedia, which is the act of going without food or water, other than the daily eucharist host, for extended and impossible periods of time.

This was seen with Padre Pio, who abstained from eating or drinking for long periods, and even stopped sleeping for a time.

The phenomena was most pronounced with the stigmatic Therese Neumann, who is said to have eaten nothing but a single communion host each day from 1922 until she died in 1962.

Its also said that she did not drink water during this period either, and suffered no ill health affects.

Oddly, the stigmata is known to vary significantly in the location of the wounds.

Sometimes they appear at the wrists, or directly in the hands, and the damage from the lance varies between stigmatics on which side of the body it appears.

The bizarre phenomena of the stigmata is something that one might expect from a medieval text, but not in modern times.

Yet it almost seems that it is increasing.

Never the less, it is likely to remain unexplainable any time soon, as those who suffer from it are still few and far between.

The stigmata remains one of the strangest and most frightening phenomena noted in the annals of the paranormal.